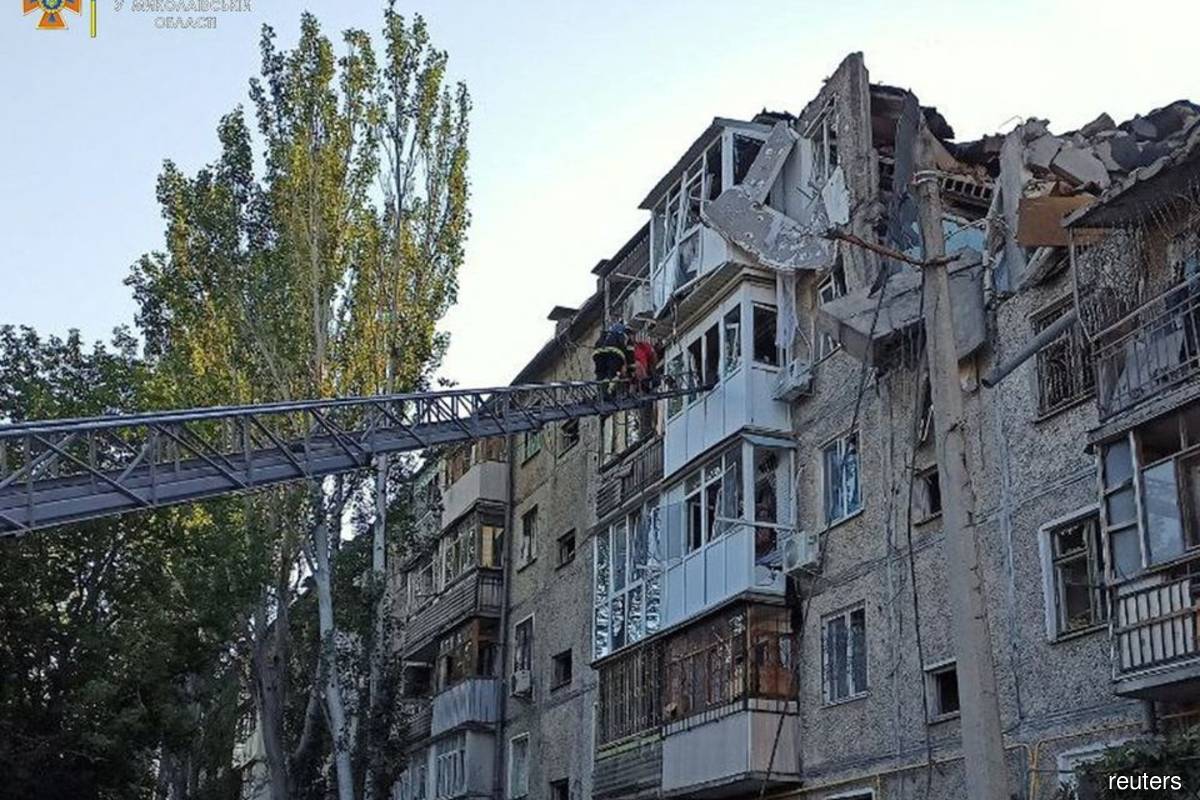 A rescuer helps a man to be evacuated from a residential building hit by a Russian military strike, as Russia's attack on Ukraine continues, in Mykolaiv, Ukraine June 29, 2022. Press service of the State Emergency Service of Ukraine/Handout via Reuters

KYIV (June 29): Russian forces struck at targets in the Mykolaiv area of southern Ukraine on Wednesday and intensified attacks on fronts across the country as NATO members met in Madrid to plan a course of action against the challenge from Moscow.

The mayor of Mykolaiv city said a Russian missile strike killed at least three people in a residential building there, while Moscow said its forces had hit what it called a training base for foreign mercenaries in the region.

In the east, the governor of Luhansk province said there was "fighting everywhere" in the battle around the hilltop city of Lysychansk, which Russian troops were trying to encircle.

The governor of Kryvyi Rih in central Ukraine said Russian shelling had increased there too in the past few days.

"Several villages have been wiped from the face of the earth," Kryvyi Rih governor Oleksander Vilkul said.

The stepped-up attacks took place as Russian President Vladimir Putin's forces make slow but inexorable progress in a conflict now in its fifth month, and followed a missile strike on a shopping mall that killed at least 18 people in central Ukraine on Monday.

Far from the fighting, leaders of NATO countries were meeting in the Spanish capital Madrid to thrash out policy in response to Russian actions, and also to any Chinese threat.

German Chancellor Olaf Scholz said members of the military alliance would supply Ukraine with weapons for as long as necessary.

US President Joe Biden told the summit the United States was strengthening its forces in Europe based on threats from Russia.

NATO was also due to invite Sweden and Finland to become members, having overcome objections from Turkey.

Russia has long complained about a perceived expansion of Western blocs towards its borders, but its invasion of Ukraine — which it calls a "special military operation" — has served to give new impetus to NATO. The European Union has also awarded Ukraine candidate status in light of the invasion.

The mayor of Mykolaiv, Oleksandr Senkevych, said eight Russian missiles had struck the city, including hitting an apartment block. Photographs showed smoke billowing from a four-storey building with its upper floor partly destroyed.

Russia's defence ministry said its forces carried out strikes on a military training base for "foreign mercenaries" near the city and also hit eight ammo depots and a fuel dump.

Reuters was not able to independently verify the reports.

A river port and ship-building centre just off the Black Sea, Mykolaiv has been a bastion against Russian efforts to push West towards Ukraine's main port city of Odesa.

The Mykolaiv strikes took place just two days after a Russian missile hit the shopping mall in Kremenchuk. Rescuers were still searching for dozens of missing on Wednesday.

The Kremenchuk attack drew international condemnation. Moscow denied targeting the mall and said it had struck an arms depot nearby, which exploded.

Britain's Ministry of Defence, in its regular assessment on the conflict, said it expected Russia to continue making strikes in an effort to hamper the resupplying of Ukrainian forces on the frontlines.

"Russia's shortage of more modern precision strike weapons and the professional shortcomings of their targeting planners will highly likely result in further civilian casualties," it said.

Ukrainian armed forces commander General Valery Zaluzhny said Russia had fired around 130 missiles on Ukraine within the last four days — an indication of the intensification of attacks.

Russia has denied targeting civilian areas but the United Nations says at least 4,700 civilians have been killed since Russia invaded Ukraine on Feb 24.

Zelenskiy addressed the UN Security Council remotely on Tuesday, describing Russia as a "terrorist state" and urging the Security Council, where Moscow has a veto, to expel it from the United Nations.

Fighting meanwhile raged further east in Luhansk province, a key battleground in Russia's assault on the industrial heartland of the Donbas region.

"There is fighting everywhere. The enemy is trying to break through our defences. And since they don't succeed, they fire with all the weapons they have, erase all the villages from the face of the earth," Luhansk governor Serhiy Gaidai said on television.

The battle for Lysychansk in Luhansk follows the fall of Sievierodonetsk, its sister city across the Siverskyi Donets River on Saturday.

Its capture would expand Russian control of the Donbas, one of Moscow's strategic objectives since its failure to seize Ukraine's capital Kyiv in the early stages of the war.

Kherson, a port city on the Black Sea, sits just northwest of the Russian-annexed Crimean peninsula.

Russia-installed officials said their security forces had detained Kherson city mayor Ihor Kolykhayev on Tuesday after he refused to follow Moscow's orders. A local official said the mayor was abducted.