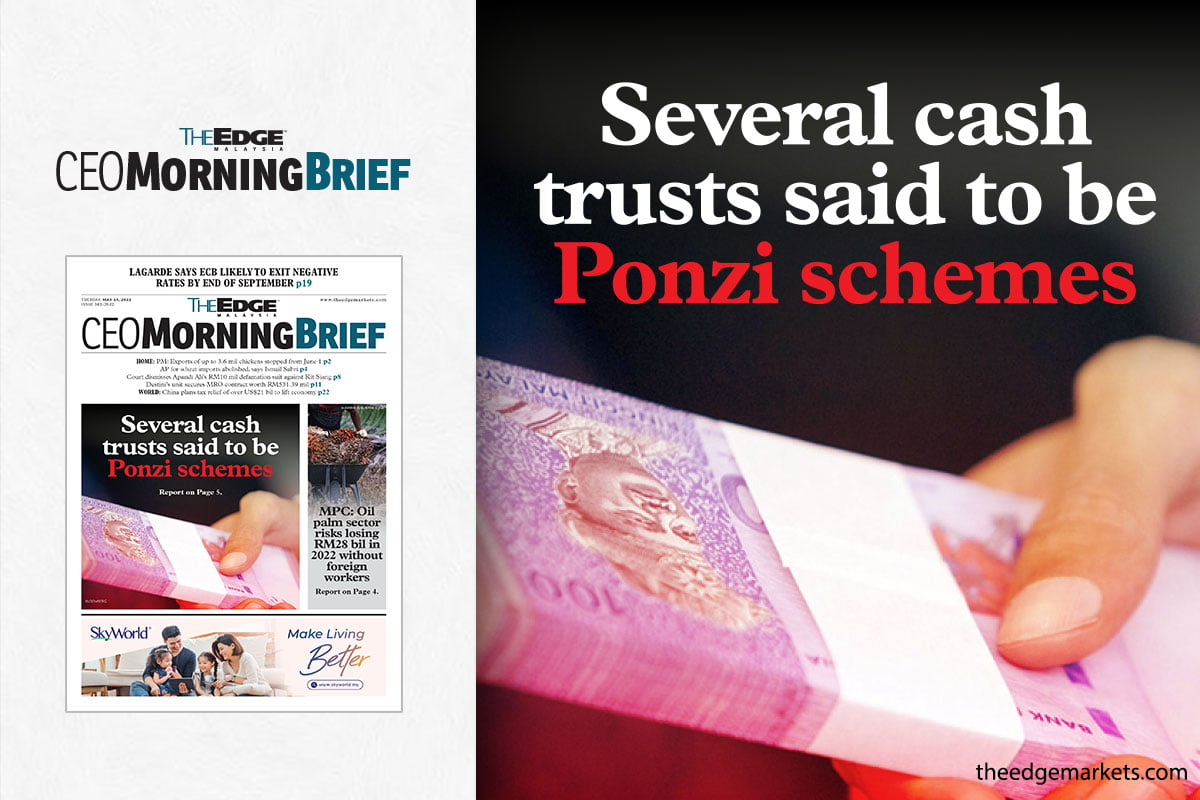 Their key gripes are centred on extremely high returns promised by these trusts and other outfits with similar modus operandi, which they suspect could be a Ponzi scheme. Some of these companies are said to offer returns of as high as 36% per annum.

In contrast, the fixed deposit rate of Malaysia's largest bank by market capitalisation, Malayan Banking Bhd (Maybank), is 2.1% for a 12-month tenure, and 2.35% for five years. And in FY2021, Maybank paid out a whopping 58 sen per share in dividends, which, while considered very high, translates to a yield of 7%.

To the uninitiated, a Ponzi scheme — named after Charles Ponzi who operated such a fraudulent system in the 1920’s — is an investment where depositors are promised a very high rate of returns, with seemingly low or zero risks.

The money ploughed in by new depositors is then used to pay returns to the earlier investors. The entire exercise snowballs until it is no longer sustainable, and the trust company is wound up, and the depositors lose their money.

Some of the more famous Ponzi schemes of recent times include that of the late Bernard (Bernie) Madoff, who was sentenced to 150 years in prison for financial fraud in 2009. He was supposed to have US$65 billion in assets under management, but there was actually very little left in the kitty.

In a short message to The Edge confirming the meeting this Wednesday, Lim said: “Few financial products related to money games [are] going around [and being] offered by certain trustee companies. It (the particular cash trusts and similar schemes in question) is a big scam. [They] took RM1 billion from the market last year.”

He added that there is no proper regulation by Bank Negara Malaysia or the Securities Commission Malaysia (SC) about these trusts, suggesting there may be a loophole in the law and the governance of these trusts.

The Edge understands that the relevant regulatory body may be the Companies Commission of Malaysia, or Suruhanjaya Syarikat Malaysia (SSM).

It is also understood that complaints have been made to the SC and other enforcement agencies on these cash trusts companies and those with similar schemes.

One such company’s website states that a cash trust is created when a sum of cash is placed in a trust, and the beneficiary or beneficiaries can tap on to the cash trust for emergencies, including for legal expenditure while waiting for an insurance payout, or pending an inheritance claim.

A unique feature of a cash trust, it states, is that it will not be frozen upon the cash trust creator’s death, and that cash in the trust is still accessible subject to terms and conditions.

This company also claims to have more than RM2.5 billion in assets under trusts, and that it has been operating for more than 30 years.

The website displays an SSM Certificate of Registration as a Trust Company, under Section 4 of Trust Companies Act 1949.

Section 4 of the Trust Companies Act 1949 stipulates that on receipt of an application as a trust company, a registrar may make enquiries as he deems necessary and if satisfied all requirements under Section 3 have been complied with, register the company and issue it a certificate as a registered trust company.

Section 3 stipulates that any public company incorporated in Malaysia may apply to the Registrar of Companies to be registered as a trust company subject to terms and conditions.

Some of the terms and conditions include the authorised capital of the company being not less than RM500,000; the board of directors are to be appointed with due care and attention according to the company’s Articles of Association; at least RM150,000 of the authorised capital has been bona fide paid up; the company has deposited securities approved by the Minister of Finance to the value of RM100,000 with the Accountant General; and the company is able to meet its obligations, apart from its liabilities to its shareholders, without taking into account the securities deposited with the Accountant General.

Another company with a similar business model promises payouts of 12% per annum but requires a minimum placement of RM250,000. However, it is not clear if the company’s subsidiaries were profit making even to sustain such a payout. It is understood that this company changed auditors three times in four years.

One source familiar with the cash trusts operations said that in some cases, companies operating such schemes are well connected, which makes them more brazen.