Shafee: It's hard to mount a defence for Najib because of prejudice 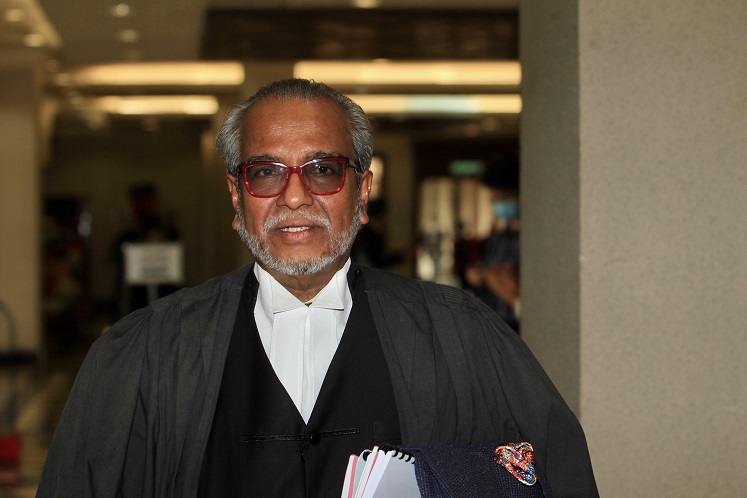 KUALA LUMPUR (June 4): The defence in former prime minister Datuk Seri Najib Razak’s SRC International Sdn Bhd trial told the High Court here today that it was difficult to mount the best defence possible for their client as he was a prime minister and a man with immense power.

Lead defence lawyer Tan Sri Muhammad Shafee Abdullah, who was giving his oral submissions during the trial today, said the defence had an uphill task to defend Najib as “a victim of a scam” because of the prejudice that he was a man of finance and, therefore, should have been aware of the money coming into his accounts.

“There is this man with immense power who was the prime minister. By virtue of the position he was in, there are a lot of prejudices that could be drawn against him. Some of the questions posed about this are that he is a man of knowledge and of finance, so how can he not be aware of the full circumstances of money coming into his accounts,” Muhammad Shafee said.

Najib himself had always maintained that he was not aware of the RM42 million that came into his accounts from SRC.

Muhammad Shafee further said the defence’s case had always been that Najib was telling the truth, that he was a victim of a scam purported by “rogue bankers” such as then AmBank relationship liaison manager Joanna Yu Ging Ping, fugitive financier Low Taek Jho (Jho Low) and then SRC chief executive officer (CEO) Nik Faisal Ariff Kamil, together with the other senior management of the SRC board.

“It is an extremely cumbersome and difficult defence because he was surrounded by people who committed the scam,” he said.

Muhammad Shafee told Justice Mohd Nazlan Mohd Ghazali that it would be easy for everyone, including the court, to believe that Najib had committed the offences.

“It’s easy for anyone, even the court, to be so fortified in this belief. The circumstances around this make the defence harder for Najib that would be available for a common man.”

“Perhaps, in a way, an open mind should be had in relation to our defence … because public prejudice is everywhere, running this defence is not an easy one,” he said.

Muhammad Shafee was addressing Najib’s abuse of power charge in the case, which falls under Section 23 of the Malaysian Anti-Corruption Commission (MACC) Act.

Najib is alleged to have used his position to commit bribery involving RM42 million through his participation or involvement in the decision to provide government guarantees for loans from the Retirement Fund (Incorporated) or Kumpulan Wang Persaraan (Diperbadankan) (KWAP) to SRC amounting to RM4 billion.

He allegedly committed the offences at the Prime Minister's Office, Precinct 1, Putrajaya, Federal Territory of Putrajaya between Aug 17, 2011 and Feb 8, 2012. If convicted, Najib faces a jail term of up to 20 years, and a fine of not less than five times the amount or value of the bribe or RM10,000, whichever is higher.

Muhammad Shafee also put forth to the court that Tan Sri Ismee Ismail’s testimony — that the man was unaware of several cash transfers that took place during his tenure as the chairman of SRC, including the deposit of a RM2 billion loan obtained from KWAP into a secret AmBank Islamic account ending 736 opened in January 2011 — was not the truth.

Muhammad Shafee also said the same about former SRC director Datuk Suboh Md Yassin, who had claimed that he was not aware of this as well.

“They said they didn’t know where the money went, that it (the transfer) was [done] without their knowledge and permission.

“Were the witnesses telling the truth? This was clearly not the case. It just showed that they did not bother about the prime minister or even the board of directors," Muhammad Shafee said.

And if the directors did not know about the transfer, then it could have happened without Najib's knowledge as well, the defence lawyer added.

Ismee had testified that the money in the AmBank Islamic account cannot be withdrawn without the Group A signatories signing the transfer of the fund.

“This money was hijacked right under their noses. They opened an account and the BOD (board of directors) did not know [about it]. The question mark is, how could this have happened?” Muhammad Shafee asked.

"The management of SRC did this even without the knowledge of the two directors that were most active,” he said.