The State of the Nation: Can Malaysia meet GDP growth target with oil at US$60? 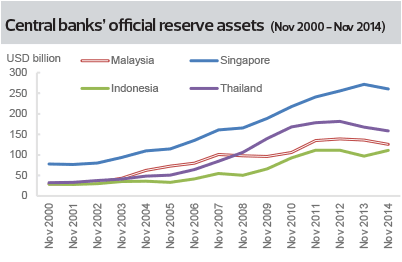 On the same day, former prime minister Tun Mahathir Mohamad wrote on his blog that “we should think very carefully before we comment on the oil price”. To quote him: “Is it true that [the fall in oil prices from US$110 to US$70] will have no effect on us (Malaysia) or that it will be good for us?”

Mahathir’s question is one playing in the minds of many, especially with Malaysia being singled out as Asia’s only casualty of lower oil pri-ces. While the country is reducing its dependence on oil-related revenue, easily a quarter of its income is tied to the natural resource and it is investments by Petronas and other oil majors that have spurred growth in  oil and gas-related stocks that, in turn, has helped power significant gains on the local stock exchange in recent years.

His question on whether growth is indeed unaffected by lower oil prices rings even louder now that oil prices have tumbled 45% from their respective highs in late-June, with Brent crude ending at US$63.33 last Friday and Western Texas Intermediate (WTI) at US$59.39 per barrel.

Similarly, the Bloomberg Asia Pacific Tapis crude has fallen 45% over the same six month period to close at US$65.55 last Friday — 20.1% below Petronas’ official selling price of US$82.09 a barrel just a fortnight ago on Nov 30 and 37.6% below the US$105 that Malaysia is believed to have based its Budget2015 projections on.

The ringgit, which closely tracks the decline in oil prices, skidded 1.04% in one day to a new 51/2-year low of RM3.5073 versus the US dollar around midday last Monday before closing at RM3.4955 on Dec 8 — sparking speculation of intervention by Bank Negara, traders say. The ringgit ended at the same level versus the greenback last Friday, 4.4% weaker in just a fortnight.

“Concerns are mounting whether tremors so far from plunging oil prices will turn into a quake and evolve into something more systemic,” says Chua Hak Bin, head of emerging Asia economics Bank of America Merrill Lynch (BaML).

“Judging from the official comments so far, the government hasn’t fully woken up to the economic and financial impact of the collapsing oil prices,” he tells The Edge. “Petronas’ warnings were sounded when oil was at US$75. Oil is now below US$65,” he says, referring to a recent warning of a 15% to 20% cut in capital expenditure next year that could significantly impact GDP.

The prevailing view now is that crude oil prices will stay at between US$60 and US$70 per barrel, possibly for a considerable period, as technological advancements makes it even cheaper to feasibly develop shale oil and gas fields, from North America to the UK as well as China. Nomura International’s senior political analyst Alastair Newton, for one, recently told clients there’s something of a fatigue on geopolitical shocks to oil supply that is now being outweighed by over-supply fears. Oil bears are predicting US$40-levels, a level prices saw in 2008 in the wake of the global financial crisis.

At the time of writing, Bloomberg data showed 71% or 17 of the 24 research houses predicting Malaysia’s 2015 GDP will come in below 5.5% — the mid-point of the government’s official forecast of 5% to 6% growth next year. It is worth noting that even the most bullish of predictors — Citigroup and Deutsche Bank — are only expecting 5.6% GDP growth for 2015. The mid-point was 5.2% with five forecasters saying Malaysia will grow slower than its official forecast at 4.2% to 4.9% (see table).

BaML’s Chua is forecasting 5% GDP growth for 2015, but says “the risk is clearly tilted toward the downside”. “We are looking at a small miss on the 3% fiscal deficit target currently (at 3.8% of GDP), but it is not inconceivable that the fiscal deficit should blow up to 5% of GDP or more if Petronas’ profits and government-related revenue plunges by more than half,” he says, pointing out that bank loan exposure to oil and gas investments, on the back of the boom in the last few years “could be material”.

“Many oil and gas share prices have plunged by more than 50%. I would be surprised if non-performing loans to the sector does not pick up,” he says, adding that the tough market conditions will make it difficult for companies looking to tap the equity markets for funds next year.

Malaysia’s public debt servicing costs now run at about RM2 billion a month, a result of expansionary measures taken, especially since 2008, to grow Malaysia’s economy. 2Q2014 GDP hit as high as 6.4% before slowing to 5.6% in 3Q2014. Thanks to the strong growth in the first nine months, Malaysia’s GDP will only need to grow between 3.8% and 5.8% in 4Q2014 for the country to meet its growth forecast of 5.5% to 6% growth for this year.

Still, in the past seven years alone, government debt has climbed from 40% of GDP to just a shade below its self-imposed 55% ceiling. It is projected to reach RM569 billion or 53.8% of GDP in 2014 but the level is nearer to 70% of GDP if contingent liabilities were to be included, experts say.

Apart from complicating the decision for Bank Negara to raise interest rates, Malaysia’s high leverage on all fronts — household, corporate and government — also likely limits the ability of private consumption (C), domestic investments (I) including that from corporations as well as government spending (G) to power economic growth.

These are two out of four key components of GDP growth by expenditure [C+I+G+(X-M)], with the remaining component being net exports (X-M) or the excess of demand for the goods and services produced by a country. While a cheaper ringgit might help spur exports growth, chances are that the impact of lower absolute selling prices for oil as well as other soft commodities like crude palm oil (CPO) would hit first.

And given that real estate was the largest contributor to the strength in the “I” component’s contribution to GDP since 2008, the projected headwinds seen in the local real estate sector — from an oversupply situation and falling prices to tighter bank mortgage terms — would also reduce the component’s strength as an engine of growth going forward.

Malaysia’s 3% fiscal deficit target for 2015 also puts a cap on government spending, more so given the chances of lower revenue from lower oil prices. While Malaysia’s Inland Revenue Board (IRB) is reportedly targeting to collect RM142 billion in taxes next year — up from RM129 billion in 2013 and its target of RM140 billion this year — collection may fall short if salaries and profits of businesses decline, observers say. Another dampener on the “C” or consumption component is the impact of the Goods and Services Tax (GST) on consumer sentiment and spending from April next year.

Malaysia’s budget deficit could be 4.4% of GDP should oil prices average US$60 to US$69 a barrel, all else being equal, says Maybank Investment Bank’s chief economist Suhaimi Ilias in a recent note.

BaML’s Chua, for one, reckons that when “the ‘new reality’ of indefinitely lower oil prices” sinks in, Malaysia would find its currently self-imposed “soft” budget constraints “being hardened”: “Lower oil will likely usher in a new age of fiscal austerity and, hopefully, discipline,” he says.

“The recent sharp deterioration in the trade balance is also compounding the risks. If November’s trade surplus does not improve, fears of a current account deficit — the first for a long while — will re-surface… If WTI stays below US$60 and Brent below US$65 for the next 12 months, Malaysia will likely see a ‘double miss’ — neither the 3% fiscal nor GDP growth targets will be met in 2015,” Chua adds.

Already, renewed fears of foreigners unwinding their high positions in MGS on the possibility of a sovereign rating cut should Malaysia fall into the so-called twin deficit situation — current account deficit as well as fiscal deficit — next year have sent the FBM KLCI 4.8% lower the past fortnight to close at 1,732.99 points last Friday.

In short, the fear of Malaysia not meeting its fiscal targets is compounded by fears of falling oil prices dragging CPO and liquefied natural gas prices lower, which combined could cause exports to fall sharply and push the current account and balance of payments into a deficit next year. Widespread fears of a sovereign rating downgrade on a “twin deficit” situation happening will cause foreigners to trim holdings in financial assets more aggressively, resulting in sharper-than-expected depreciation of the ringgit, observers say.

Foreigners have between July and October this year withdrawn about RM7.3 billion or more than US$2.2 billion worth of investments in Malaysia’s sovereign debt, as seen by the fall in foreign holdings of MGS to 45.91% in October from 48.35% in July. Foreign holdings of MGS still stood at RM147 billion in October, Bank Negara data show. This is just over one-third of Bank Negara’s reserves of RM411.7 billion as at end-November, already down by RM8 billion (US$2.4 billion) over one month from RM419.7 billion as at end-October. Foreign selling of ringgit-denominated bonds and subsequent conversion into US dollars would put further pressure on the ringgit, which is already deemed as a casualty of lower oil prices.

“Declines in ringgit vs USD and crude oil prices so far suggests that every US$10 drop in crude oil price can result in a 6 sen depreciation in ringgit vs USD … This is based on the simple observation that as Brent crude tumbled US$47 from this year’s high back in June 19, the ringgit lost 29 sen against the greenback,” Maybank’s Suhaimi wrote in a Dec 9 note. Maybank’s forex research team forecasts the ringgit to continue on a “weak bias” against the USD at 3.50 in 1Q2015, 3.53 in 2Q2015 and 3.55 in 3Q2015 before stabilising to 3.45 in 4Q2015.

Just how much further the central bank has had to smoothen the impact of the selling will be revealed when Bank Negara releases its accounts as at Dec 15 this Monday (Dec 22).

Whatever the case, Maybank’s Suhaimi reckons that the tougher conditions from lower oil prices means Malaysia needs to reprioritise its development spending allocation as well as review and optimise its operating expenses to meet its targets. In short, Malaysia needs to “exercise zero tolerance on avoidable overspending” that has been repeatedly highlighted in the Auditor General’s report.

If the tough conditions forces out wastages, Malaysia could emerge stronger ahead.

Lim Chee Sing, RHB Research Institute’s executive chairman and chief economist, for one, prefers to see falling oil prices as “a double-edged sword”. “It acts like an indirect tax cut for people in the large oil importing countries and may just provide a boost that is very much needed for a stalled-speed recovery in the major world economies. For portfolio investors, adversity breeds opportunity, provided you take an investment view and are able to identify and pick quality stocks,” says Lim, who reckons oil prices will likely stay low “for at least another one or two quarters, if not longer”.

With change being the only constant in a dynamic world, Malaysia needs to ensure it makes the best out of the current situation. Admitting that lower oil prices would pose a challenge for Malaysia is the first step in the right direction. 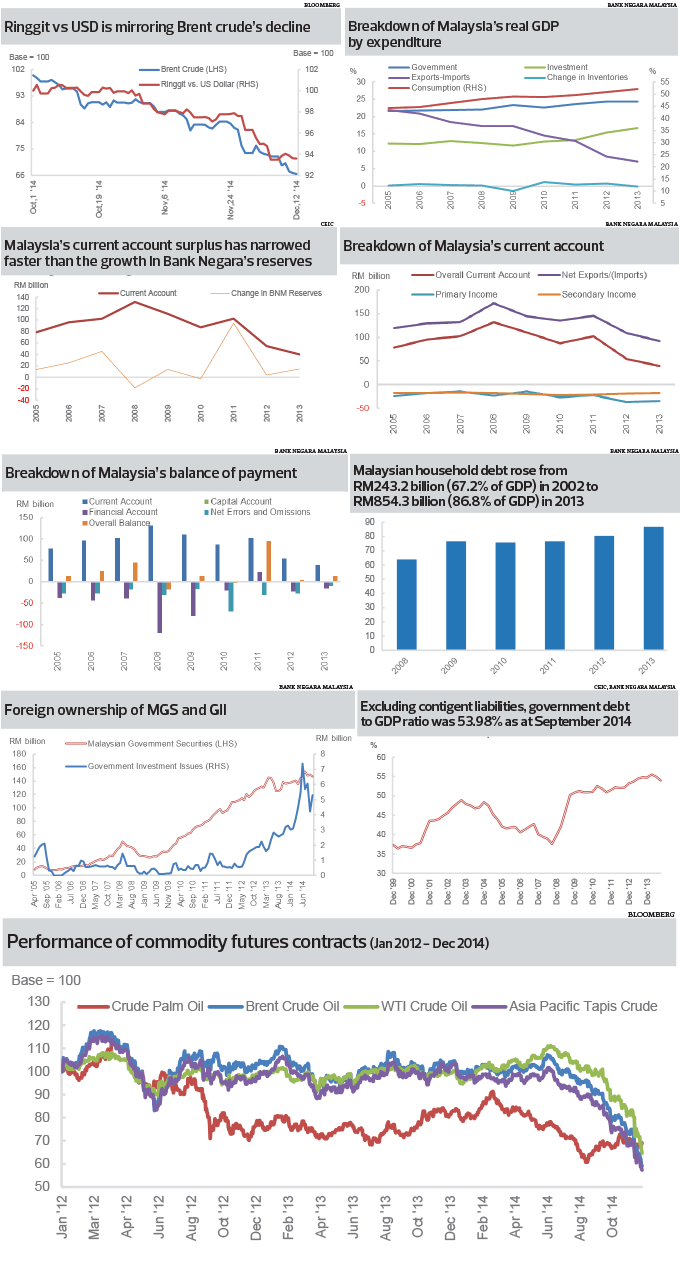