DGB Asia Bhd
DGB Asia Bhd was formerly known as DSC Solutions Bhd and is listed on the ACE market. It is a small-cap technology company with a market capitalization of only RM25.2 million.

This company is engaged in the development and provision of software and engineering consultancy for automated identification and data collection (AIDC). More than 50% of its revenue is generated from AIDC products and services, which include the sale of bar code and radio frequency identification reading equipment, hand-held computers and radio frequency data communications systems.

Rising costs, weaker sales and asset impairment caused DGB to succumb to a net loss of RM2.5 million in FY2013. Despite the annual losses, DGB has net cash of RM3.9 million as at 30 June 2014. This translates to 2.4 sen per share, and accounts for 40% of its net assets per share of 6 sen. The stock is currently trading at 2.7 times book.

Going forward, DGB is seeking new product lines and business partners overseas for expansion, given the strong competition in Malaysia and Singapore. In particular, it is looking to expand more aggressively in Vietnam and Thailand.

Toward this end, DGB has proposed a rights issue, comprising two rights shares for every share held, plus three free warrants for every four rights shares subscribed to.  It hopes to raise between RM6.8 million and RM35.5 million from the exercise.

Potential future re-rating catalysts for the stock include the free warrants from the rights issue, the success of its overseas ventures, and the likelihood of increased demand arising from the implementation of the Goods and Services Tax (GST) regime. 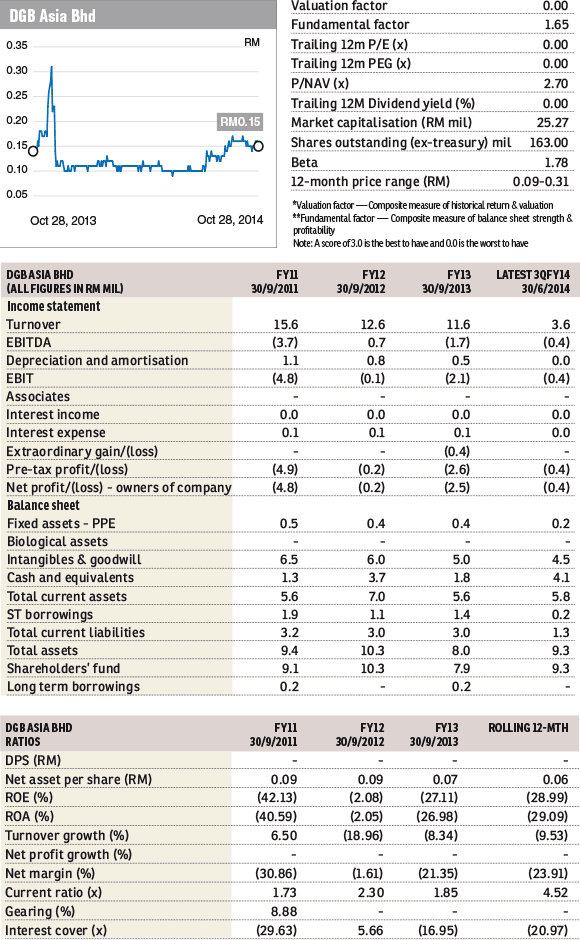