Streetscapes: Where the streets have no … people 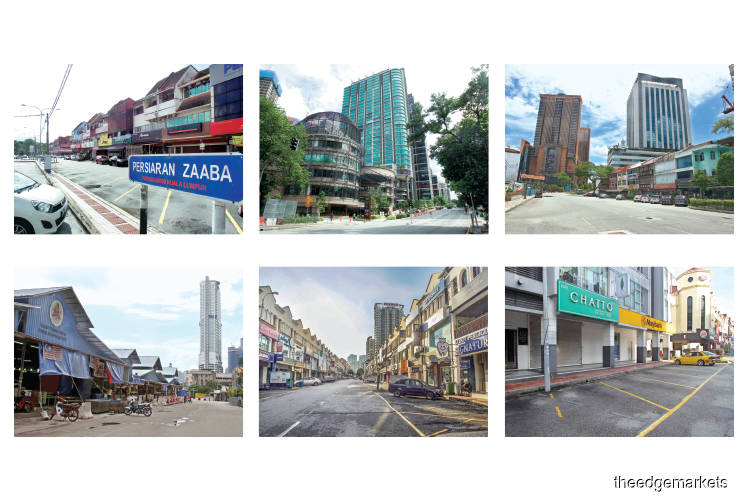 The Covid-19 pandemic and the subsequent lockdowns across half the globe have left normally busy streets deserted, creating a surreal cityscape. Malaysia was no different as people stayed home under the Movement Control Order. Some states have since moved into phase five – the Conditional Movement Control Order – which allows most businesses to resume operations, albeit with strict standard operating procedures and less restrictive movements. In this two-part compilation, we revisit a few streets we had covered in our Streetscape column previously. There are a number of areas in Taman Tun Dr Ismail (TTDI) that bear the Zaaba name. Persiaran Zaaba, located off Jalan Datuk Sulaiman, is one of the quieter ones.

The name “Zaaba” came from educationist, writer and expert on the Malay language Zainal Abidin Ahmad (1895-1973), who was fondly known as Za’aba, according to Kuala Lumpur Street Names: A Guide to Their Meanings and Histories by Marianna Isa and Maganjeet Kaur.

Persiaran Zaaba is a loop road lined with shops and residential properties, and is home to Pos Malaysia TTDI as well as popular eateries such as Porto Romano, Burger King @ TTDI, Der Backmeister and Sweet Mill Frozen Food Bakery.

CCO & Associates (KL) Sdn Bhd executive director Chan Wai Seen puts the current asking price for the shops at between RM4.6 million and RM4.85 million. There have been only two transactions of the 3-storey shops (1,875 sq ft) in the past three years — one was sold for RM4.9 million in 2017 and the other for RM4.1 million this year. Located northwest of the Kuala Lumpur city centre, Mont’Kiara was a rubber estate before property tycoon Datuk Alan Tong Kok Mau acquired 100 acres of land and started its transformation into the high-end enclave it is today.

There are many high-end condominiums and neighbourhood malls along Jalan Kiara. Mont’Kiara Pines was the earliest condo built in the 1990s by Sunrise Sdn Bhd (now known as UEM Sunrise Bhd), priced at RM190 psf at the time of the launch.

He believes Jalan Kiara, with its high-end residences near an international school and prime neighbourhood shopping complexes, will continue to attract expatriates. The street was once known as Perkin Roads. In 1968, Datuk Raja Mohamed renamed it after his father, Raja Alang Raja Berayun, who was a Mandailing from Sumatra.

Other landmarks in the area include Safuan Plaza, which houses The Regency Hotel, and Guru Nanak Darbar Tatt Khalsa Diwan Selangor, a Sikh gurdwara. One can also find a number of shoplots occupied by restaurants, wholesalers of health products and beauty product retailers as well as residential properties.

Currently, a 17,416 sq ft freehold residential parcel along the street is going for RM7.97 million while a 17,847 sq ft freehold commercial site is priced at RM8.92 million.

At Tamu Residence serviced apartments, the asking price for units with built-ups of 917 sq ft is RM1.35 million, or RM1,472 psf. Jalan Imbi is a busy street with a mix of new and old developments and houses eateries, hair salons, laundrettes, clinics, courier service providers, travel agencies and budget accommodations. A few landmarks that have remained in their original spots are Oversea Restaurant and Jalan Imbi Chapel.

Jalan Imbi was originally known as Imby Road and named after Sergeant Imby Seedin, who was born in 1845. He joined the police force at the age of 16 and became chief native warder four years later.

He bought a parcel at the junction of Jalan Imbi and Jalan Pudu and built himself a traditional Malay house. When the cart road that connected Imby’s house to Jalan Bukit Bintang was gravelled in 1905, the Street Naming Committee decided to name the road after him as his home was considered a landmark. In 2018, the landmark was replaced by the Metro Hotel.

There are a few hotels along the road, including Dorsett Kuala Lumpur, The Ritz-Carlton Kuala Lumpur, Tribeca Hotel & Serviced Suites and Capri by Fraser. Berjaya Times Square, which has 2.1 million sq ft of retail space, is located at the junction of Jalan Imbi and Jalan Pudu.

Metro Homes Realty Bhd executive director See Kok Loong says demand for commercial properties in the area is high but supply is limited. Many owners inherited the shops from the previous generations and there are very few transactions. The commercial centre in Kota Damansara, Dataran Sunway is a popular spot for the M40 group. It comprises mainly 3 to 4-storey shopoffices, 3-storey retail shops and small office/home office (SoHo) and office suites in Sunway Nexis.

It is also known for the wide variety of food options that range from nasi kandar and Chinese hawker fare to Japanese and Korean cuisines. The F&B outlets include crowd favourite Original Kayu Nasi Kandar Restaurant, Warakuya Japanese Garden as well as TK Bakery.