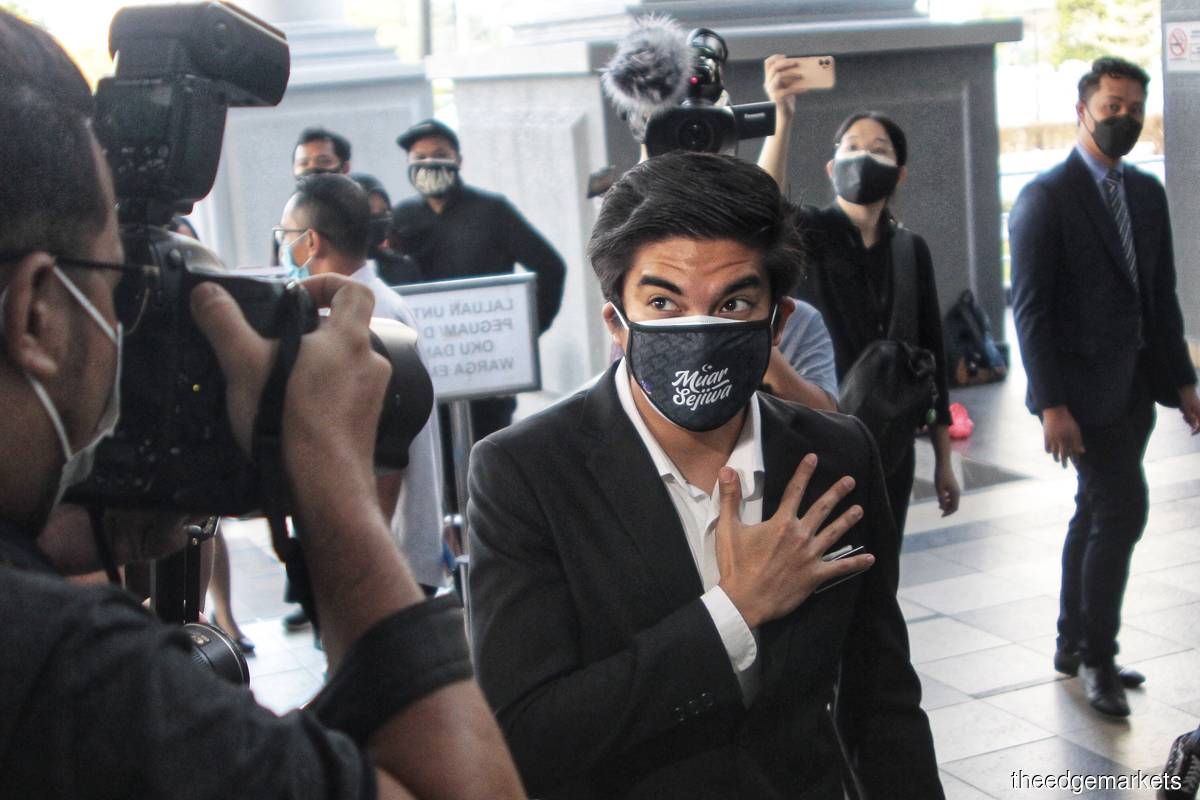 KUALA LUMPUR (July 4): The High Court was told on Monday (July 4) that Muar Member of Parliament (MP) Syed Saddiq Syed Abdul Rahman had ordered the withdrawal of RM1 million from the Parti Pribumi Bersatu Malaysia’s (Bersatu) Angkatan Bersatu Anak Muda’s (Armada) account for fear that there would be a change in the party’s leadership.

Former Armada assistant secretary Ahmad Redzuan Mohamed Shafi, 32, said Syed Saddiq told him that he had the right to use the money in the Central Armada’s CIMB account which he had sourced through donations.

According to the special officer to the Senior Education Minister Datuk Dr Radzi Jidin, a meeting was held at Syed Saddiq’s house in Petaling Jaya, Selangor in early March 2020.

“The meeting was attended by me and Rafiq Hakim Razali (Armada assistant treasurer). We discussed about the change in government and Armada’s position in the government because YB Syed Saddiq was in the opposition bloc along with Tun Dr Mahathir Mohamad.

“YB Syed Saddiq has ordered Rafiq Hakim and I to withdraw money amounting to RM1 million from Armada’s account,” he said when reading his witness statement at the trial of Syed Saddiq, who faces four charges related to criminal breach of trust (CBT) and money laundering.

The 11th prosecution witness noted Syed Saddiq said the money had to be withdrawn from the account to strengthen his position as the Armada chief in the event of any internal party crisis.

Ahmad Redzuan said only him and Rafiq Hakim were called by Syed Saddiq to attend the meeting because they were the trustee signatories of CIMB Bank Armada Pusat cheques and only the three of them knew about the matter.

“Rafiq Hakim and I withdrew RM1 million from Armada’s official account on March 6, 2020 at the instruction of YB Syed Saddiq.

“[However,] YB Syed Saddiq did not tell me and Rafiq Hakim whether the withdrawal had received permission of the Bersatu Supreme Leadership Council (MPT),” said Ahmad Redzuan, who informed that Syed Saddiq had also told him the money was meant for party use.

The witness also said he had suggested to Rafiq Hakim to keep the money at Mohd Daniel’s house because the latter had a safe.

Ahmad Redzuan said Rafiq Hakim agreed to his suggestion and after the money was withdrawn from the account, Rafiq Hakim brought the money to his house before handing it to Mohd Daniel.

The witness added that he only knew that Syed Saddiq’s order was an offence after being summoned by the Malaysian Anti-Corruption Commission (MACC) on June 3, 2020 for violating Clause 24 of the Bersatu Constitution.

Ahmad Redzuan said according to Clause 24, the Treasurer-General is only allowed to keep retail cash of not exceeding RM50,000 at a time and the money must be kept in a safe place in a registered office for the party’s retail expenses.

He said expenditure in excess of RM500,000 at any one time is not allowed without the prior permission of MPT.

“I confirm that YB Syed Saddiq himself cannot withdraw cash from the CIMB Bank account under the name of Parti Pribumi Bersatu Malaysia (Armada Pusat) without instructing me and Rafiq Hakim to do so.

“Regarding the RM1 million issue, although the approval was issued by YB Syed Saddiq to me and Rafiq Hakim to withdraw the money, it violates the ethics of withdrawing money from Armada’s account,” he said, adding that he had to abide by Syed Saddiq’s instructions given his capacity as the Armada chief and also Muar MP.

According to the first charge, Syed Saddiq, 29, is charged as the then Bersatu’s youth wing or Armada chief — who was entrusted with control of Armada funds — with abetting Rafiq Hakim Razali, Armada’s assistant treasurer at the time, with CBT of RM1 million in funds belonging to the wing.

He is alleged to have committed the offence at CIMB Bank Bhd, Menara CIMB KL Sentral, Jalan Stesen Sentral 2, here on March 6, 2020, and is charged under Section 406 of the Penal Code, which provides for imprisonment for up to 10 years with whipping, and is liable to a fine, if found guilty.

For the second charge, the accused is charged with misusing property for himself, namely RM120,000 from the Maybank Islamic Bhd account belonging to Armada Bumi Bersatu Enterprise, by causing Rafiq to dispose of the money.

Syed Saddiq is accused of having committed the offence at Malayan Banking Bhd, Jalan Pandan 3/6A, Taman Pandan Jaya here, between April 8 and 21, 2018, and charged under Section 403 of the Penal Code, which carries a minimum jail term of six months and a maximum of five years with whipping, and is punishable by a fine, if convicted.

He also faces two counts of engaging in money laundering activities, namely two transactions of RM50,000, believed to be proceeds of unlawful activities, from his Maybank Islamic Bhd account into his Amanah Saham Bumiputera account.

Syed Saddiq is accused of committing the offence at a bank in Jalan Persisiran Perling, Taman Perling, Johor Bahru, on June 16 and 19, 2018.

Read also:
JC Azhar reminds all parties not to make comments on Syed Saddiq's case
Syed Saddiq trial: I didn’t lie, but afraid of being charged in court for another case — ex-Armada exco