TaxPlanning: Budget 2022 and the individual’s tax 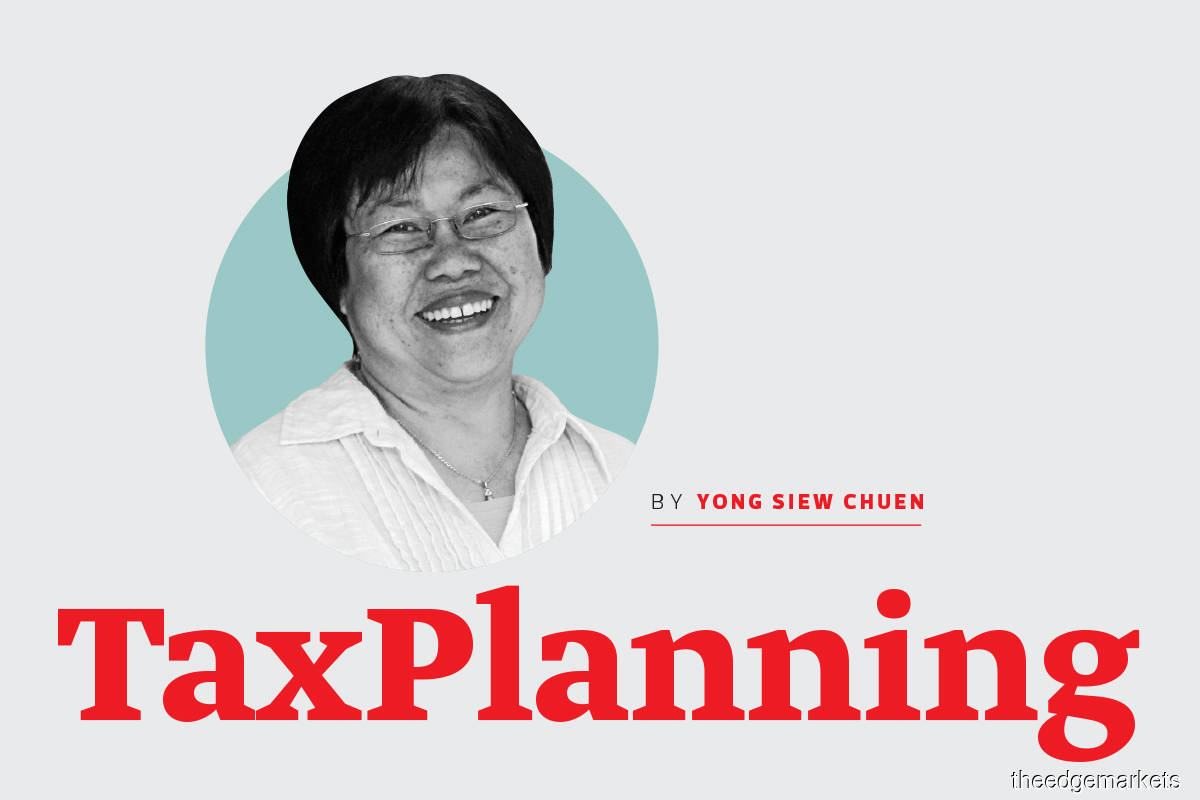 Budget 2022, tabled on Oct 29, 2021, proposed multifarious measures. On Nov 9, 2021, the Finance Bill 2021 was made available to the public. This article does not purport to comprehensively and exhaustively cover all the measures and changes. I will only discuss those that arguably are more impactful on individuals as investors, taxpayers and managers of business entities.

1.     An end to the exemption of residents in respect of foreign-sourced income remittances

4.    Introduction of a new withholding tax on payments to resident individuals

5.    Increase of loss carry-forward period to ten years of assessment

6.    Extension of two years of assessments for reinvestment allowance

1. An end to exemption of residents in respect of foreign-sourced income remittances

Some background information will help readers to understand this issue.

For the rest of us, the “derivation and remittance” scope of taxation has been adopted since 1974, that is, all Malaysian residents are subject to tax in respect of:

-     all income derived from within Malaysia; and

-     income received in Malaysia from outside Malaysia.

Non-resident persons have been exempted in respect of foreign-sourced income since 1974.

In 1995, Malaysia introduced a blanket exemption for resident companies in respect of  income received in Malaysia from outside Malaysia, leaving only income derived from within Malaysia taxable. In 2004, this exemption was extended to all residents, including individuals.

This has worked well: all companies and individuals, other than those on world scope (banks, insurance, shipping and air transport businesses), were free to bring back their income derived from outside Malaysia without having to suffer tax in Malaysia.

The financial crisis in 2008/9 roiled the developed nations. This spurred the band of rich nations called OECD (Organisation for Economic Co-operation and Development) to introduce the International Tax Standard under the BEPS (Base Erosion Profit Shifting) initiatives, which aims to counter international tax avoidance.

In 2019, Malaysia pledged its commitment to the International Tax Standard. This standard, among other things, deems a blanket exemption of foreign-sourced income as a harmful practice, as it may lead to double non-taxation. Malaysia was thus placed on the “grey list” as a country with such a harmful practice but which has committed to remedy the situation.

What are the implications?

A person — be it a company, an individual, trust, and so on — who has derived income from outside Malaysia and who brings (remits) the income (whether wholly or in part) back to Malaysia, whether in the same year or in a later year, will, effective from Jan 1, 2022, be obliged to report the amount thus remitted as their income for the relevant year of assessment (YA).

If the foreign-sourced income is received in Malaysia by residents during the period of Jan 1, 2022, to June 30, 2022, the Malaysian government is offering a low rate of 3% of the gross amount. I surmise that this is like a promotional offer to encourage residents to bring their money home.

By implication, if the remittance occurs after June 30, 2022, the amount will be aggregated with the other sources of income and be subject to tax at the respective tax rates. This means that a resident company will be taxed at 24% while the resident individual will suffer the tax rate applicable to his income band.

Mr Diligent worked outside Malaysia from 2001 to 2019 and had accumulated savings of RM200,000 in a bank in the foreign country when he returned to Malaysia in March 2020. Diligent has remained and worked in Malaysia ever since. He is currently in the 24% tax bracket.

He has brought back the following amounts to Malaysia:

He also has plans to bring back the following amounts in 2022:

As Diligent has paid tax in prior years in the foreign country, he is entitled to a double tax relief in Malaysia when the RM30,000 and RM80,000 are brought to tax in Malaysia in YA2022. [In this article, I will not go into the requisites and mechanics of how the double tax relief is calculated, as this should be done with the help of your tax adviser.]

ABC Sdn Bhd (ABC) is a company incorporated and resident in Malaysia with a financial year-end of Dec 31 and a share capital of RM10 million. It derives business income from engineering services in Malaysia, duly reported the income in each relevant YA and has been subject to tax in Malaysia.

In 2021, using funds from its retained earnings in Malaysia, ABC invested in a real property outside Malaysia. In February 2022, it plans to dispose of the real property and bring back the entire sum, that is, the principal sum and the net gain (after expenses and after paying the capital gains tax in the foreign country) of about RM2 million on disposal.

ABC has a subsidiary in a foreign country, which expects to pay a net dividend of RM500,000 in the third quarter of 2022.

Tax treatment in Malaysia for YA2022

The RM2 million from the sale of the real property, comprising the principal and the gains, is capital in nature; thus this will not be subject to income tax in Malaysia.

It will also not be subject to RPGT in Malaysia as the tax is only leviable on gains from a disposal of real property situated in Malaysia.

Issues to be expected

There will be issues in the implementation of this taxation of foreign-sourced income:

•    If there is a double tax treaty with the foreign country, provisions of the treaty must be considered;

•    Documentation must be available to support the quantum and timing of the remittance;

•    Documentation is necessary to support that the foreign tax has been suffered and when;

•    Evidence or argument must be adduced to support that the amount received is not income or revenue in nature; and

•    Whether there is a constructive receipt, for example, contra transaction.

2. Restoration of the RPGT zero-rating for citizens and PRs

Yay, at least being a Malaysian citizen or PR counts for something! Seriously, this is good news for the good citizenry of Malaysia.

This means that a citizen or PR who disposes of a real property (be it residential property, land or shares in a real property company) after having held it for five completed years, will be zero-rated, that is, no RPGT will be charged, if the disposal occurs on or after Jan 1, 2022.

Do note that the date of disposal for RPGT purposes is:

•    the date of the written agreement, that is, the sale and purchase agreement; or

•    in the absence of a written agreement, the date of completion of the disposal (the date of transfer of ownership or the date full consideration is received by the disposer, whichever is the ­earlier); or

•    in the case of a disposal contract conditional upon approval from the government or a state government, the date of such approval.

Call it what you like, this is a 33% tax on a company which has a chargeable income (after tax-deductible expenses, capital allowances, losses) in excess of RM100 million for YA2022. This is for one YA only, and represents a 9% increase from the standard tax rate or headline tax of 24% for companies.

For some historical context, Malaysia did have an excess profits tax (EPT) regime in the mid-1970s through to early 1990s. Back then, an EPT of 5% was imposed on all persons on excess profits variously benchmarked at RM200,000, RM300,000, RM2 million or 25% of shareholders’ funds.

Is this tax a good thing?

Compared with the past EPT regime, the current prosperity tax of 9% is pitched at a very much higher, absolute (fixed) and simple (no complicated calculations) threshold of RM100 million and is limited to companies only.

But it does smack of punishment for profitability and efficiency. Moreover, this tax is highly likely to produce a knock-on effect and diminish dividend pay-outs by these “super-profit” companies in financial years 2022/2023. Wait a minute, does it not mean that the shareholders and the investing public will be the final bearers of this tax?

Is this desirable? Go figure.

There is another thing. Let’s hope it will not be extended beyond 2022.

4. Introduction of a new withholding tax on payments to resident individuals

Hitherto, withholding tax at source has been prescribed for payments to non-residents.

Now, a new law has been proposed to require a company to withhold 2% of gross payments (in cash or kind) made to a resident individual who is authorised to act as the company’s agent, a dealer or distributor for sales, transactions or schemes. There is a requisite threshold of RM100,000 in the immediately preceding year for the withholding to apply in the following year.

Any tax withheld or that should be withheld by the company must be paid over to the Director General of Inland Revenue (DGIR) within one month of paying or crediting the payment. If the company fails to withhold the tax or pay over the tax withheld within the stipulated one month, the company will have to bear the 2% withholding tax and pay a 10% late-payment penalty. Until these are paid, the company will not be able to claim tax deductions in respect of such payments.

The tax withheld serves as a tax paid in advance for the resident individuals who act as agents, dealers or distributors, which means that they will be able to set off the amounts withheld against their individual income tax liabilities.

For readers who manage companies, do take note of this tax requirement as any non-compliance will prove costly.

5. Increase of loss carry-forward period to 10 years of assessment

Prior to 2019, business losses could be carried forward indefinitely. In YA 2019, the carry-forward period was restricted to seven YAs.

Now, Budget 2022 proposes to allow a 10-year carry-forward instead.

This is welcome as it will provide some relief to some big-ticket projects or long-gestation businesses that had found it difficult to absorb their losses within the seven-year period.

6. Extension of two more years of assessments for reinvestment allowance

•    in manufacturing: through expansion, modernisation, automation or diversification, or

•    in agricultural project: through expansion, modernisation or diversifying its cultivation and farming business.

The reinvestment allowance is arguably one of the most utilised and effective tax incentive to encourage continued investment in factory, plant and machinery.

However, there is a cap of 15 YAs for a company to reinvest and benefit from the incentive through additional relief for qualifying capital expenditure. Some companies have started to exhaust the 15-year incentive period.

Budget 2021, and now Budget 2022, has had to extend the relief period by four (2 + 2) YAs so that reinvesting businesses may continue to enjoy the reinvestment allowance beyond the 15 YAs.

It would be sensible to discard the cap of 15 YAs altogether. After all, established businesses would need to continually reinvest by expanding its capacity, automating its production to reduce reliance on scarce human labour, modernising its processes through better equipment and machinery, and diversifying through upstream or downstream integration.