TheEdge says: Give the rakyat a break ... A unity govt is the best hope for Malaysia With the Pakatan government’s collapse, the stage was set for Dr Mahathir to propose a radical solution that will erase much of the tension sapping the nation’s energy. (Photo by Chedetofficial Twitter) 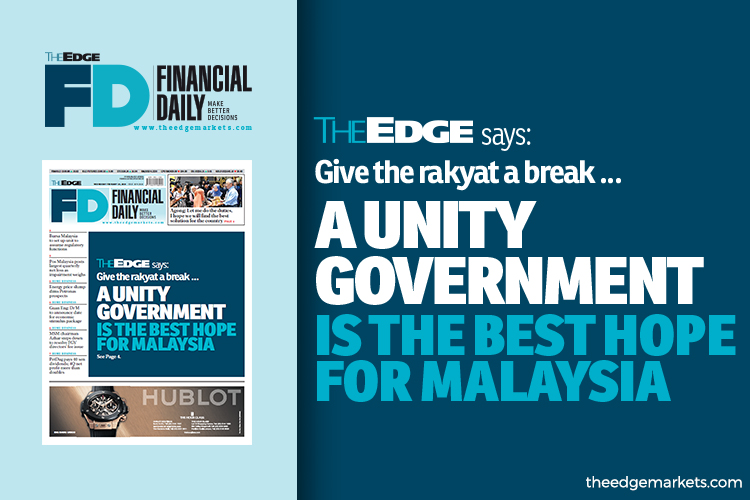 The political turmoil since the weekend offers a golden opportunity to clear the deck of numerous dangerous obstacles threatening to ground the ship of state.

Chief among these dangers is the threat to national unity posed by escalating racial and religious extremism following the shock defeat of the Barisan Nasional coalition in the 14th general election in 2018.

Equally problematic is the growing political instability arising from the jostling for power among political party leaders. Related to this is the question of who will succeed Tun Dr Mahathir Mohamad as the next prime minister.

Further, there is the complicated task of purging the country of corruption, addressing political patronage and curbing their many ramifications throughout the economy.

So, with the Pakatan Harapan government’s collapse on Sunday, the stage was set for Dr Mahathir to propose a radical solution that will erase much of the tension sapping the nation’s energy — a unity government to bring together political leaders of all hues to work as one for the common goal of building a new Malaysia.

Dr Mahathir proposed the idea of a grand coalition to leaders of major political parties that he met yesterday morning, including those from his collapsed government and the parties they defeated in the 2018 election, sources said.

A unity government has many advantages. It greatly reduces rivalry for power among political groups, allowing them to channel their energies towards a common objective, so fostering the greater good of the nation.

Such a government can comprise individual members of parliament (MPs) instead of political party representatives, allowing the prime minister to not only choose the best talents to helm ministries but, being inclusive, will naturally reduce racial and religious polarisation.

Leaders could then focus on delivering programmes for the people’s welfare, to address the many constraints holding back the economy and pressing social issues keeping the people from achieving their highest potential.

It is abundantly clear that the current ugly political environment needs to be sanitised, and by de-emphasising partisan politics, sensitive issues of race and religion can be better managed in the spirit of national unity.

We call on Malaysians of all backgrounds to support this initiative on the table. It may not fix all the problems that our nation faces but will give everyone a breathing space that we badly need after the toxicity of the past few years.

This was what happened in 1973 when Gerakan and PAS accepted Tun Abdul Razak’s offer to join the unity government under Barisan Nasional after the 1969 race riots. The DAP chose to stay out.

We hope this time around, MPs from DAP together with PKR and Amanah will support a unity government. We also hope MPs from Bersatu, Umno and PAS will do the same. The country needs a break from the venomous politicking of recent years.

With a unity government offering stability and synergy that we need to succeed as a nation, those wishing to continue playing the race and religion card can be isolated from the mainstream narrative.

Whether a snap election would resolve who commands majority support of Parliament, as suggested by some, is an open question. It may well unleash a bloodletting among political rivals and impact the electorate negatively.

It is possible not every group would be willing to participate in a unity government. To be a true democracy, we must allow room for those wanting to opt out to have their own space to act as a check and balance on the government.