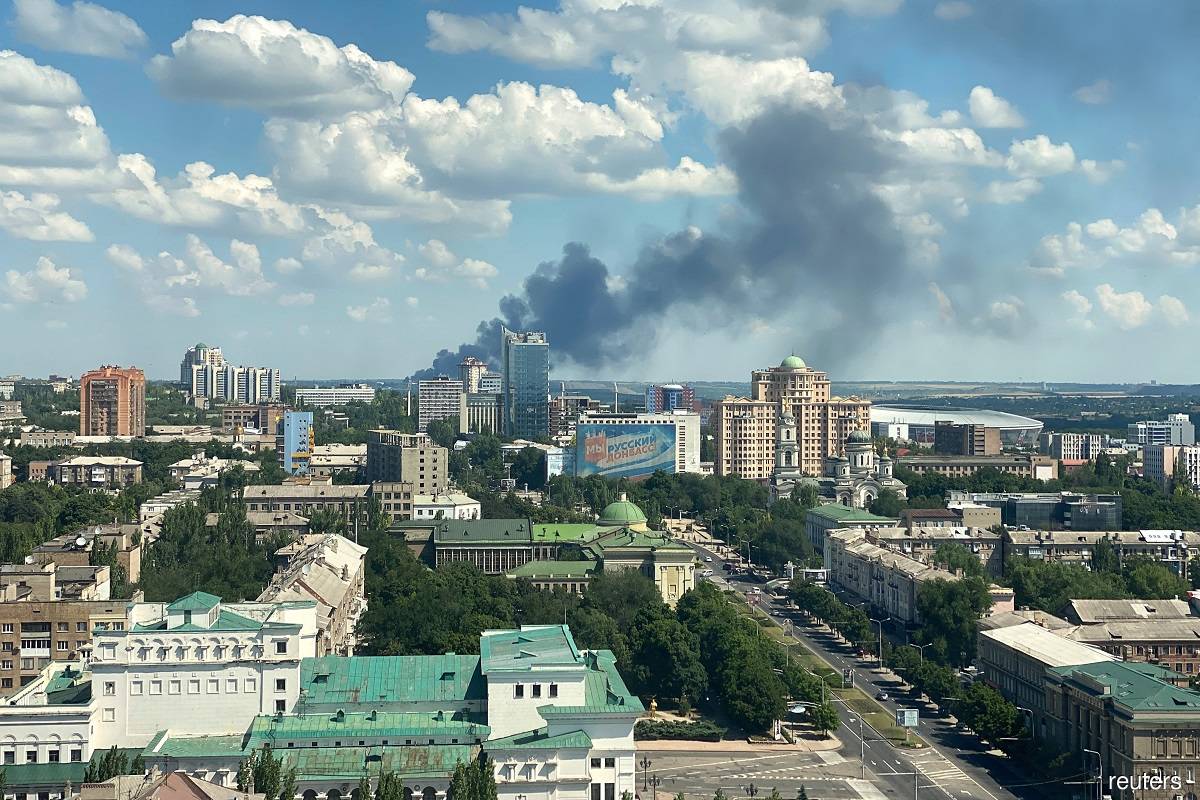 Smoke seen billowing from an area in Donetsk, Ukraine after being shelled on July 4, 2022.

KYIV (July 4): Ukrainian forces were taking up new defensive lines in the east on Monday, preparing for a hard new phase in the war as President Vladimir Putin proclaimed Russia's victory in the months-long battle of Luhansk.

Russia's capture of the city of Lysychansk on Sunday brought an end to one of the biggest battles in Europe for generations, which saw Moscow bring the full might of its ground forces to bear on a small pocket of the front line for two months.

The battle completes Russia's conquest of Luhansk province, one of two regions it has demanded Ukraine cede to separatists in the Donbas region.

During a brief televised meeting with his defence minister, Putin congratulated Russian forces on their "victories in the Luhansk direction". Those who participated in the combat should "absolutely rest and recover their military preparedness", while other units continue fighting in other areas, he said.

The battle is the closest Moscow has come to achieving one of its stated objectives since its forces were defeated trying to capture Kyiv in March, and marks Russia's biggest victory since it captured the southern port of Mariupol in late May.

Both sides suffered thousands dead and wounded, while claiming to have inflicted far greater losses on their enemy, along a loop of the Siverskyi Donets river that winds through Luhansk and Donetsk.

Lysychansk, neighbouring Sievierodonetsk and surrounding towns — many with heavy industrialised plants that served as fortified bunkers for defenders — were razed to a wasteland by relentless Russian bombardment. Russia repeatedly tried and failed to surround the Ukrainians, eventually opting to blast them out instead with the brute force of its artillery.

Military experts said the battle could prove to be a turning point in the war — not because of the strategic value of the ruined cities themselves, which is limited — but because of the impact of the losses on both sides' ability to fight on.

"I think it's a tactical victory for Russia but at an enormous cost," said Neil Melvin of the RUSI think tank in London, comparing the battle to the huge fights over meagre territorial gains characteristic of World War One.

"This has taken 60 days to make very slow progress," he said. "I think the Russians may declare some kind of victory, but the key war battle is still yet to come."

Ukraine, which could have withdrawn from Luhansk weeks ago but chose to keep fighting there to exhaust the invasion force, hopes the ferocity of the battle will leave the Russians too depleted to hold on to gains elsewhere.

Serhiy Gaidai, Ukrainian governor of Luhansk, acknowledged that his entire province was now effectively in Russian hands, but told Reuters: "We need to win the war, not the battle for Lysychansk... It hurts a lot, but it's not losing the war."

Gaidai said the Ukrainian forces that retreated from Lysychansk were now holding the line between Bakhmut and Sloviansk, preparing to fend off a further Russian advance.

The mayor of Sloviansk said heavy shelling on Sunday had killed at least six people, including a 10-year-old girl.

Rob Lee, of the US-based Foreign Policy Research Institute, said the new Ukrainian defensive line should be easier for Ukraine to defend than the pocket in Luhansk province it has given up.

"It's something that Putin can show as a sign of success," he said. "But overall, this doesn't mean Ukraine will have to concede or give in any time soon."

Dmitry Medvedev, deputy head of Putin's security council, posted on social media that Ukraine was being egged on to keep fighting by Western leaders who "lose their minds at the sight of someone else's blood", and Ukraine's own rulers who were driven by "cocaine ecstasy".

Ukraine's hopes for a counter-attack rest in part on receiving additional weapons from the West, including rockets that can neutralise Russia's huge firepower advantage by striking deep behind the front line.

Last week, Ukraine scored its own major victory, driving Russian forces off Snake Island, a desolate but strategic outcrop in the Black Sea that Moscow had captured on the war's first day but could no longer defend from Ukrainian strikes.

Ukraine's military said on Monday it had now hoisted its flag there.

Melvin, the RUSI expert, said the decisive battle for Ukraine was likely to take place not in the east, where Russia is mounting its main assault, but in the south, where Ukraine has begun a counteroffensive to recapture territory.

"This is where we see the Ukrainians are making progress around Kherson. There are counter-attacks beginning there and I think it's most likely that we'll see the momentum swing to Ukraine as it tries to then mount a large scale counteroffensive to push the Russians back," he said.

"We will rebuild the walls, we will win back the land, and people must be protected above all else," Zelenskiy said.