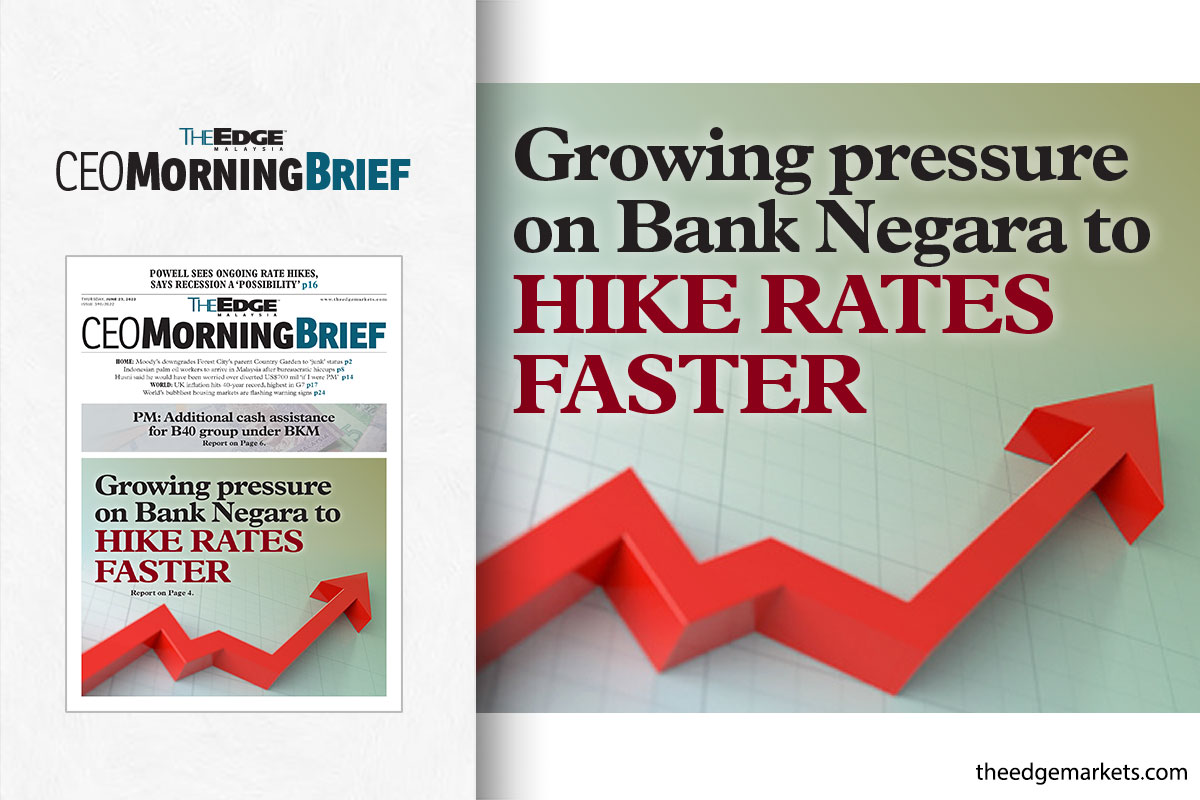 KUALA LUMPUR (June 22): There is growing pressure on Bank Negara Malaysia to hike rates faster in the face of an aggressive US Federal Reserve, and widening consensus that global food and energy prices will continue to stay elevated for longer, with any potential supply shocks seen capable of driving prices and inflation even higher.

In a note on Wednesday, UOB Global Economics and Market Research cautioned that the key takeaway is that "doing nothing or acting too slow" could sow seeds of more persistent and elevated inflation in the future, with more negative effects on demand and the economy.

"Rate hikes would then also need to be sharper and more abrupt in that scenario. There may also be a need to act faster now in order to have sufficient policy buffers in preparation for the next recession (when it happens). A lagged policy response by BNM relative to peers could also risk excessive ringgit volatility in 2H22 (the second half of 2022)," its economists Julia Goh, Enrico Tanuwidjaja and Jasrine Loke wrote.

"As such, we think BNM would need to weigh how these factors could affect domestic economic conditions while the fast narrowing rate gap with the US puts more pressure on capital flows and the ringgit," they wrote.

Although BNM does not adopt an inflation targeting framework, and headline inflation remains manageable — which is largely due to government subsidies in place — the economists noted that the rising cost of the government’s subsidy bill and supply distortions due to the price controls have already pushed the government to reevaluate the subsidy mechanism.

On Tuesday, the government announced the removal of subsidies for bottled cooking oil and the ceiling prices for chicken and eggs from July 1, to ensure adequate food supply in the market and to stabilize prices in the longer term.

Room for 50bps OPR hike before end of September

"Given the ongoing domestic recovery and latest developments, there is room for BNM to follow-through with another 25 basis point rate hike at both the July and September meetings," they added.

BNM, which just raised the key rate by 25bps to 2% in May -- its first hike since January 2018 -- has previously sounded that the removal of monetary accommodation would be 'measured and gradual'.

But it has also acknowledged that the negative output gap, a potential indicator of rate adjustments, was closing faster than projected, the economists said.

"As we expect Malaysia’s growth momentum to remain robust this quarter and next, we think that BNM may consider bringing forward rate hikes to keep a lid on inflation risks while growth remains decent. Our updated OPR projections are 2.5% by end-2022 and 3% by end-2023. Even after projected hikes of 75bps for this year, monetary policy would still be accommodative as it only reverses part of the 125bps of rate cuts during the pandemic," they said.

Malaysia’s core inflation rose for the seventh straight month to 2.1% in April, which the trio noted is its highest level since January 2018, and above the long-term average of 1.4%.

It is also closer to the headline inflation of 2.3%, an upward trend the trio noted is likely to continue into 2H22, given persistent global food supply shortages, high commodity prices, lapse of favorable base effects, and currency weakness, they wrote.

In view of the above, BNM has projected underlying inflation or core inflation to average higher at 2% to 3% in 2022, which the economists noted is closer to its headline inflation target of 2.2% to 3.2%. UOB's estimate is 3%.

“Noteworthy is that current inflation projections have not accounted for potential upward revisions in other price-administered items (such as flour, sugar, and cooking oil) or adjustments in electricity and water tariffs as well as fuel subsidiaries that will further exacerbate upside risks to the baseline inflation forecasts.

“Should these price revisions materialise, it will further intensify the second-round effects of inflation,” the economists said.

The economists are expecting the US Fed to raise rates further to reach an upper end of 3.5% by end 2022, and further 4% by end-1Q23. "Emerging markets’ central banks will start to follow suit or risk falling behind in the rate gap with the US interest rate," they added.