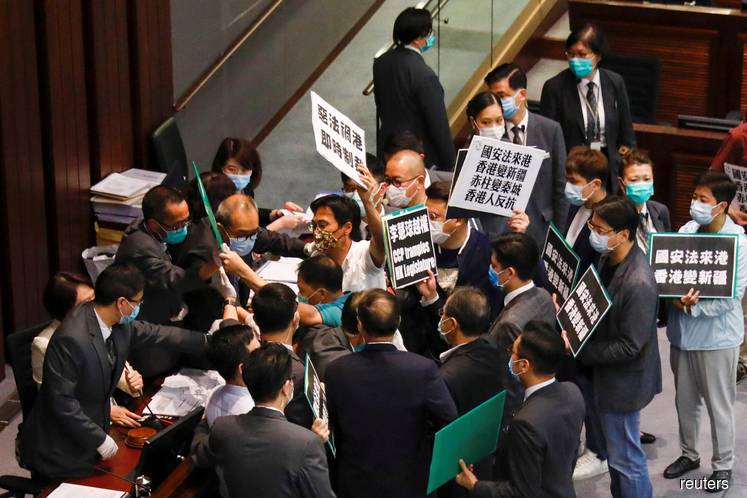 Secretary of State Michael Pompeo indicated on Friday that the U.S. would reconsider exemptions that shield Hong Kong exports from tariffs that apply to Chinese goods, if Beijing moves forward with “its disastrous proposal” to impose new restrictions on the island.

And Kevin Hassett, one of Trump’s top economic advisers, said his staff was studying possible retaliatory measures: “We’re absolutely not going to give China a pass,” Hassett said in an interview Friday with CNN. “All the options are on the table.”

The admonitions came as China signaled it was undeterred by international condemnation of its plans to bypass Hong Kong’s legislature and implement new national security laws that residents of the city fear will erode freedoms of speech, assembly and the press. The announcement marked an escalation of Bejing’s efforts to exert more control over Hong Kong, after months of sometimes-violent protests that gripped the city last year.

But pro-democracy activists quickly called for protests to oppose the plan, setting up another summer of unrest for President Xi Jinping, who is struggling to tame the coronavirus outbreak and keep the most populous nation in the world from a protracted economic decline.

“Any decision impinging on Hong Kong’s autonomy and freedoms as guaranteed under the Sino-British Joint Declaration and the Basic Law would inevitably impact our assessment of One Country, Two Systems and the status of the territory,” Pompeo said in a statement.

Hassett also warned that steps to change Hong Kong could prove “very costly to China and the people of Hong Kong” because outside investors may stop viewing the city as “the financial center that it is.” In a subsequent interview with Fox Business Network, he said investors were unlikely to invest “in a place where they’re basically, you know, sneering at the rule of law.”

“I would expect that they’re going to have serious capital flight problems in Hong Kong, if they follow through this, they will no longer be the financial center of Asia, and that they themselves will pay very, very heavy costs,” Hassett said.

Trump’s national security adviser, Robert O’Brien, also cautioned that China’s efforts could put Hong Kong’s status “under various customs unions” as well as “privileges that Hong Kong accrues because it’s considered a free system” at risk. And O’Brien hinted the U.S. might look to coordinate possible retaliation with its allies.

“If China moves forward and takes strong action with this new national security law against the people of Hong Kong, America will respond,” O’Brien said on Thursday night in an interview with Fox News. “I think other countries in the world will respond including the United Kingdom and our allies and friends.”

China’s announcement spurred a rare moment of bipartisan agreement on Capitol Hill. Republican senator Pat Toomey of Pennsylvania and Democratic senator Chris Van Hollen of Maryland on Thursday introduced legislation that would sanction individuals interfering with Hong Kong’s autonomy. That could include not only Chinese officials working to push the new laws through but also police officers and local officials who crack down on protests in the city.

Last year, U.S. lawmakers passed a bill that requires the secretary of state to annually re-certify Hong Kong’s autonomy to preserve its special trade and commercial status. Pompeo delayed that review -- saying he wants to see what happens at the National People’s Congress gathering where China is expected to introduce the new national security laws — and Trump could move to revoke Hong Kong’s special trade status.

The MSCI Hong Kong Index fell 6.8% on Friday, marking the worst day for Hong Kong stocks since the global financial crisis. Real estate firms were the worst hit amid concern over potential outflows and curbed spending, with Sino Land Co. and Link REIT plunging the most since 2008. The Hang Seng Index sank 5.6%, while the Hong Kong dollar weakened to a six-week low.