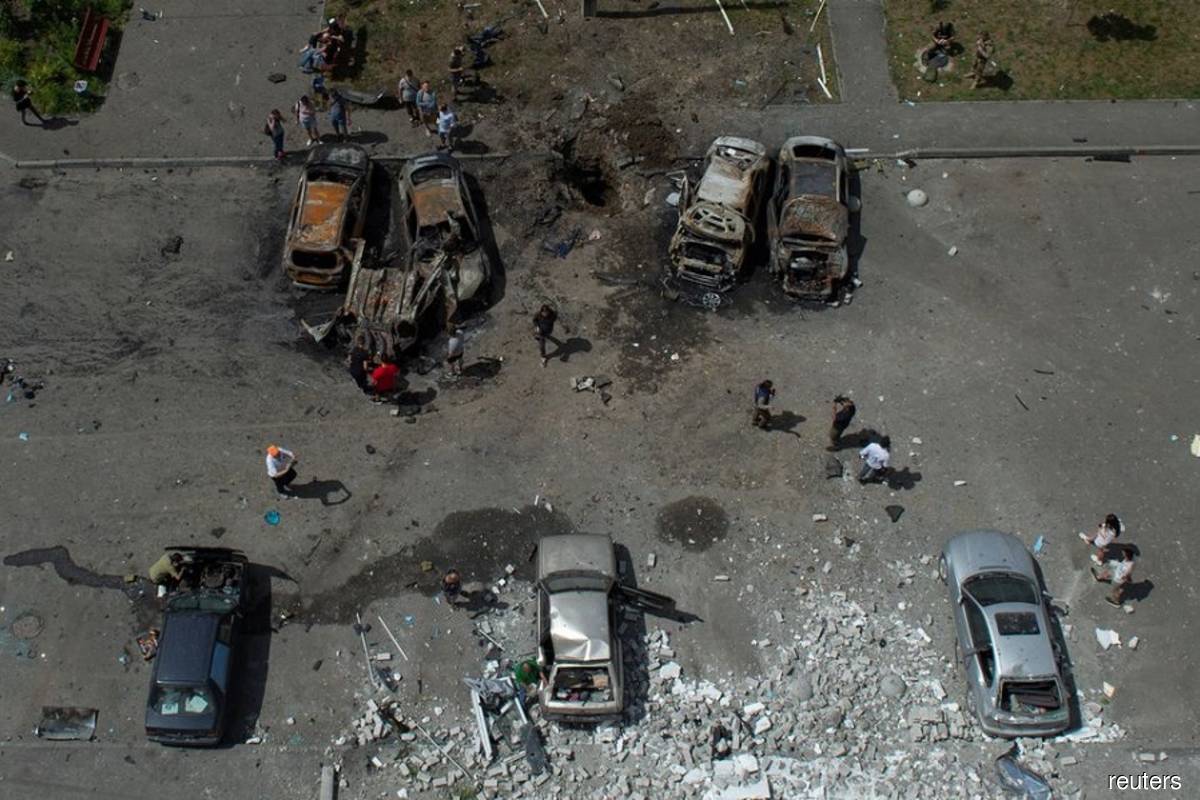 People stand next to cars destroyed by a Russian missile strike, as Russia's attack on Ukraine continues, at a residential area in Kharkiv, Ukraine on June 26, 2022. (Reuters filepix by Sofiia Gatilova)

KYIV (June 27): Western nations on Monday pledged unwavering support for Ukraine in the war with Russia, including more sanctions on Moscow and air-defence systems, as Russian forces closed in on the last big city still held by Ukrainian troops in eastern Luhansk province.

"It's useless to hope for decency and humanity from Russia," Ukrainian President Volodymyr Zelenskiy wrote on Telegram.

Leaders of the Group of Seven major democracies, meeting at a German alpine resort, said they would keep sanctions on Russia for as long as necessary and intensify international pressure on President Vladimir Putin's government and its ally Belarus.

"Imagine if we allowed Putin to get away with the violent acquisition of huge chunks of another country, sovereign, independent territory," British Prime Minister Boris Johnson told the BBC.

"The lessons for that would be absolutely chilling. The point I would make to people is I think that sometimes the price of freedom is worth paying."

The United States said it was finalising a weapons package for Ukraine that would include long-range air-defence systems — arms that Zelenskiy specifically requested when he addressed the leaders by video link on Monday.

Despite the boost from its allies, Ukraine was enduring another difficult day on the battlefront following the loss of the now-ruined city of Sievierodonetsk after weeks of bombardment and street fighting.

The General Staff of Ukraine's Armed Forces said the Russians were trying to cut off Lysychansk from the south. Russian war planes had also struck near the city, the general staff said in its daily update.

Russian reports on Sunday that troops had already entered Lysychansk could not be confirmed by Reuters.

A Reuters reporter in Kremenchuk saw the charred husk of the shopping centre with a caved-in roof. Firefighters and soldiers were pulling out mangled metal and other debris as they searched for survivors.

Dmytro Lunin, the regional governor, said it was unlikely many survivors would be found in the smouldering rubble, because "it was a big fire and there was a lot of smoke".

He said there was no military target nearby that Russia could have been aiming at, adding: "It's an act of terrorism against civilians."

Luhansk and neighbouring Donetsk province make up the Donbas region, Ukraine's industrial heartland and a prime target for the Kremlin after Russian troops failed to take the capital Kyiv early in the war, now in its fifth month.

Russian forces also control territory in the south, including the port city of Mariupol, which fell after a long siege that left it in ruins.

A senior US defence official, speaking on condition of anonymity, said that Russia had carried out about 60 strikes against Ukraine over the weekend.

The official said a weekend strike in Kyiv that hit apartments was close to a factory that made munitions for Ukrainian forces.

"As long as it takes"

In his address to the G7 leaders, Zelenskiy had pleaded for more arms, US and European officials said. He asked for help to export grain from Ukraine and for more sanctions on Russia.

US National Security Adviser Jake Sullivan said Washington was in the process of finalising a package that included long-range air-defence systems and would meet Ukraine's artillery ammunition needs.

The G7 nations promised to tighten the squeeze on Russia's finances with sanctions, including a deal to cap the price of Russian oil that a US official said was "close", and promised up to US$29.5 billion more for Ukraine.

"We will continue to provide financial, humanitarian, military and diplomatic support and stand with Ukraine for as long as it takes," a G7 statement said.

NATO Secretary-General Jens Stoltenberg said its troops on high readiness would be massively boosted to over 300,000, with the Western alliance set to adopt a new strategy describing Moscow as a direct threat.

"They have chosen confrontation instead of dialogue. We regret that — but of course, then we need to respond to that reality," he told reporters.

Russia rejected claims that it had defaulted on its external debt for the first time in more than a century, telling investors to go to Western financial agents for the cash which was sent but bondholders did not receive.

The White House said Russia had defaulted as sweeping sanctions have effectively cut the country off from the global financial system.

The war has created difficulties for countries way beyond Russia's borders, with disruptions to food and energy exports hitting the global economy.

Russia invaded Ukraine on Feb 24 in what the Kremlin calls a "special military operation" to rid the country of far-right nationalists and ensure Russian security. It denies targeting civilians in a conflict that has killed thousands, sent millions fleeing and laid waste to cities.